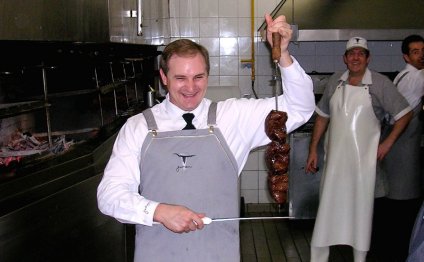 Brazil will be the just nation in the world where in fact the meals will come in bigger portions than on United states dishes.

Which is particularly true about the carnivorous aspect.

It is animal meat because of the wheelbarrow when you look at the barbecue custom called churrascaria.

The Brazilian barbecue custom comes from the south the main nation, from a gaucho technique of preparing beef in the wide-open country after an extended day wrangling cattle.

These days the wranglers come your way at churrascaria, wielding skewers of meat from all manner of monster and bringing the cuts to your dining table one at a time.

There is a lot more than 20 various kinds of animal meat to pick from for the duration of dinner at the huge churrascarias.

Each skewer-toting server methods with a certain slice. You inspect and nod, like it absolutely was a bottle of wine, and also the waiter then slices down a chunk to help you savor.

Whenever a few waiters vie for the tastebuds, it looks like a fencing match will bust out.

It could get frantic from the churrascaria flooring, but it is worth it, due to the fact slow-grilling Brazilian barbeque design called rodizio produces some incredibly delicious food.

It begins with a fanatical commitment to top-notch beef and special slices. The hunks of animal meat tend to be stabbed on the skewer and then slow-roasted rotisserie-style over charcoal to secure the juiciness and flavor.

When the top level of animal meat is browned, it really is sliced off fresh to provide.

The barbecuing is tailored to your individual tastes.

The hands-down favorite for Brazilians is picanha, a rump cut that is sliced in thin sheets and consumed with rice and beans. Proper who wants to go through the Brazilian barbecue tradition, picanha is a must.

By Steven Raichlen Although the world’s eyes are trained on the 2016 Summer Olympics in Rio de Janeiro, I thought I’d acquaint…

We think there are 5 great reasons why you should eat our beef: Our company is enthusiastic about all 5 and handle our farm…